It’s always bittersweet to see your favorite player go no matter what the sport or the level play.

On November 21, 2015 the UAAP had the most thrilling win for the FEU Tamaraws but a dramatic and sad exit for Ateneo Blue Eagles superstar Kiefer Ravena together with his team mate Von Pessumal. Both players have been team mates since their playing days in the Blue Eaglets and for a guy like me it’s quite tough to see two players go. I just wish one of them had left the team first the way closing pitcher Mariano Rivera did with the New York Yankees when he left in 2013 then Derek Jeter the following year. Their departure from Ateneo and the UAAP is more of Tim Hudson and Jeremy Affeldt retiring this year with the San Francisco Giants.

I haven’t watched so much UAAP since I started college in Letran (obviously because my school is in the NCAA) but since Ateneo’s last championship in 2012 the Blue Eagles revolved the team around him which is good and his leadership is not like any other from a fan’s standpoint.

When my brother was still playing varsity basketball for San Beda, I would always see Kiefer together with his team mates in their age bracket to the other basketball courts in Xavier School (the regular venue of the tournament that has four basketball courts with three concrete courts and a hardwood court) getting ready and as he starts playing you know that he would give his best for his school. As I try to recall everything in those days, he did not experience a championship because of a stronger San Beda that time in the division which had Arthur Dela Cruz who now plays in the pros for Blackwater. Like my brother in their respective age brackets they would end up winning their third-place games the next weekend in 2006.

A player like Kiefer is one of a kind because as early as first year high school he already began playing for the UAAP juniors division in 2007. He may have started his collegiate career with a championship in 2011 but not in his first year in the juniors with a De La Salle Zobel team of Joshua Webb and Nico Elorde in the lineup and La Salle coming back with a vengeance from their suspension that caused their absence in 2006. He is also one of the few players who have played for pride and country with the RP Youth before then he played for pride and country again for the recent Southeast Asian Games together with players like Baser Amer, Troy Rosario, Glenn Khobuntin, Earl Scottie Thompson, Norbert Torres Kevin Ferrer, Jiovani Jalalon, Almond Vosotros, and Mac Belo who ironically made that last shot yesterday that led Ravena and Pessumal’s exit in the UAAP and the Blue Eagles. Many even consider that his kind of play is already PBA ready that could make him a direct-draft from high school player like Kobe Bryant or Kevin Garnett in the NBA but that was just an exaggeration. You cannot just put raw talent in the PBA especially with a point guard like him. 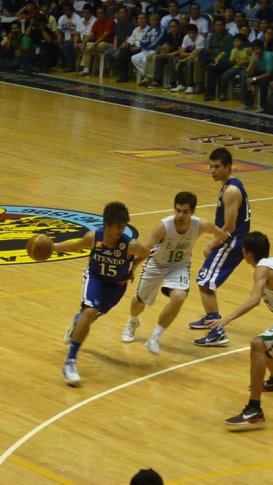 His collegiate career for me is a game-changer. With a player as good as Kiefer playing for Ateneo, college basketball in the Philippines became a venue for marketing and business ventures particularly in the UAAP marketing not just on Kiefer but also for other good players as good and popular as him in each UAAP member school. His popularity in the collegiate level individually draw the UAAP endorsements not just a side-by-side commercial with Jeron Teng of La Salle for a vitamin advertisement. It also led Kiefer to guest in numerous TV shows and magazine covers throughout his five years in the UAAP and for sure there will be more as he prepares for the big leagues. The best part is you are not just a good player playing for Ateneo, playing against La Salle is without a doubt the best and win against the rival team. His game play brings out the joy and hate for some people. He would go out and score as many as twenty points and dish some plays then win it then leave a highlight play like that one slam dunk he did against Karim Abdul of UST or that red hot game he had just this season.

Like players who had intense individual rivalries like Magic Johnson and Larry Bird, Kiefer’s most intense rival for me is not Jeron Teng of La Salle but UST’s Kevin Ferrer. It may be a mismatch but these two players have been going at it since playing for the juniors of the UAAP. The most intense between Ravena and Ferrer was when the two met in the UAAP juniors finals in which both players were playing for their last playing year in the juniors with Kevin Ferrer already awarded the juniors MVP but then Kiefer would win the UAAP juniors championship and eventually becoming the finals MVP of the that series in 2010. Their matchup in the junior finals revived the Ateneo-UST “exchange rivalry” in that division in which UST won first in 1994 then Ateneo in 1995 then UST again in 1996 and so on but by 2000 the Blue Eaglets faced the Tiger Cubs and seal the deal to show which team was really the best of that era by then in 2001 the UST Tiger Cubs would win it showing that they are still a force to reckon with in the juniors. After the juniors, the two players would meet in 2012 playing for the same team and Ferrer would lose to Kiefer again after two years. In all of the games that Ravena and Ferrer met in the UAAP for Ateneo and UST respectively Ravena would always have best of Ferrer. Other than Kevin Ferrer, Baser Amer is also worthy to be called Kiefer’s rival since they play both the same position.

Ateneo and San Beda maybe leagues apart from each other since the 1970s, the rivalry that was Ateneo-San Beda lives on during tournaments like the Fil Oil Flying-V pre-season invitational and the Philippine Collegiate Champions League (PCCL) that showcases the UAAP and NCAA teams altogether. When Ateneo goes against San Beda in tournaments like these, Ravena and Amer would show the same kind of passion, heart and determination to win the game then leave everything on the basketball court become friends again.

When he plays, he will always give his best for the team. The number of points that he does on the floor will only show how bad he wants to win. Love him or hate him, he’s just out there to play for his team and doesn’t care about what other people would say about his game especially when he flopped on those crucial games that almost made me lose my respect for him because for a good player like him why would he flop? I’ve never been a fan of the Blue Eagles but why would he do such thing because Kiefer’s flopping for me became evident in 2012 especially in the first game of the 2012 finals in UAAP Season 78 and with me not being able to watch the UAAP the way I did before college I wouldn’t really know how often has he flop since then. A Kiefer Ravena flopping is a no-no because as a good player and role model for some, he won’t just do it.

As Kiefer leaves the college basketball scene it’s not yet over for Ateneo because Ateneo would still be playing at the PCCL being a UAAP final four team and that Kiefer would still wear his Ateneo uniform one last time time for that tournament since he didn’t make headlines that he will be part of the PBA draft for this PBA season. Speaking of the PBA, I don’t know what team will require his services but I do hope that team will make it worth drafting Kiefer. Other than basketball he should no longer do acting jobs like that one sitcom he did on one channel with Ogie Alcasid because it only shows how basketball players are truly bad actors and “acting” on court is a different story. With that, I wish Kiefer the best and that he would start strong when he reaches the pros.